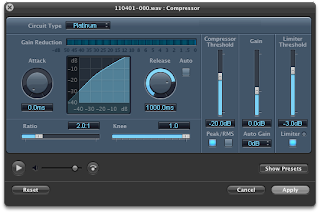 It's under Process >Dynamics I think and what this little HUD does is basically, bring up low levels and bring down high (or loud) levels.
Set the Limiter Threshold to something like -6 or -3dB (don't forget to tick the blue box to activate this slider), monkey with the Gain so overall it's at a level you like and generally bring up the Compressor Threshold a bit to clear out some background noise.
Now, some audio people are undoubtedly reading this with one eyebrow raised but yes, I know what all this stuff does but this is Quick Fix Post Friday Madness.
See the little play button to the left of the volume slider? To the right of that slider is a preview button of sorts which will toggle the audio playback with and without this filter applied so you can see if you're making things sound worse or better; it's easy to mess with stuff so much and lose track of just how much you've changed things from the original.
Hit Apply to apply.
You'll see all sorts of fun adjustments happening and when I was done with this bit of audio the whispers were loud enough to hear but not overbearing, the applause was now less room rattling and a bit of the background hum was removed as well.
Sometimes on some systems there's a bit of a nasty bug with some of these effects. Occasionally you'll hit playback to see what your changes sound like and the resultant audio will be full volume and screeching from distortion. I don't know why. A few times toggling the play button usually resolves it, I'm told.
Posted by Walker Ferox at 7:08 PM