VLC for the Mac may be dead due to lack of active developers.

If you can help out or know someone that can, head over to their developer page.

There are now effectively zero active developers for MacOS.

As an immediate consequence, the 64-bits releases for MacOS has already been put on hold.
I don't need to mention the stale status of the MacOS user interface.
If it goes on like this, MacOS support may be discontinued as of VLC 1.1.0. There is nobody to make the necessary updates to the MacOS support code, for instance to support the new VLC video output architecture.

Taking into account the learning curve to VLC development, I think it is fair to say that the situation is now critical.

Microsoft has decided to disable a 17-year-old video codec in older versions of Windows rather than patch multiple vulnerabilities, according to the company's security team.

You can read the article here. I'm sure that at some point, with some client this will be an issue.
Posted by Walker Ferox at 1:58 PM 0 comments

Western Digital has something called "Advanced Format" for hard drives that increases their usable space anywhere from 7 to 11%. You can read about it here. Looks like it's transparently compatible with OS X.

I guess it's another way to keep increasing HD space while skirting the issue of superparamagnetism.
Posted by Walker Ferox at 3:32 PM 0 comments

Shoot Underwater on the Cheap

I don't have an iPod nano 5G that does video so I can't test this out but a company called H2O Audio has an underwater case for the iPod Nano 5G which lets you shoot video underwater.

A company called DryCase makes one for the iPhone (which I can't test either since I still don't have an iPhone) or any electronic device which costs only $40 or so and is vacuum-sealed with a headphone jack on the outside.

As a kid I'd wrap my 8mm Video camera in Saran Wrap and jump into the pool with it which was cheaper but considerably more adventurous.

Or you can just do this:

Audio Waveforms Only Display When Zoomed

In FCP 6.0.6 I've mentioned the audio waveform display bug before, but here's a new twist to an old problem.

In the Timeline one set of audio will display the waveform while another one won't. They're identical as far as I can see and in fact, were recorded at the same time only on two separate yet identical cameras. 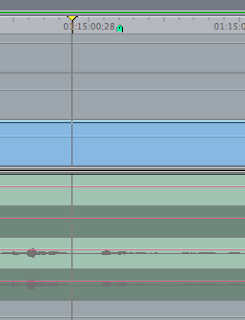 That's what it looks like in the Timeline. The upper channels are flatlined, but if you load that audio clip into the Viewer you'll see something like this: 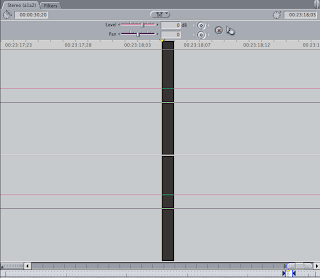 Now, if you zoom in one more iteration you'll see the waveform: 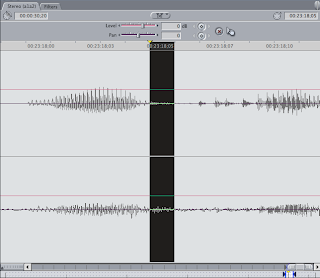 Most of the time quitting and relaunching FCP (6.0.6) will clear this up but not always. Trashing the waveform cache can help as well but it's not a 100% guaranteed fix.
Posted by Walker Ferox at 1:14 AM 0 comments

AUgraphicEQ's Battle of the Bands

I've never been able to get the AUgraphicEQ audio filter's 10 Band setting to work. It's either a bug or something I'm unaware of. When I set the pull-down to 10 Bands nothing changes...the sliders aren't reduced in number nor are they linked so it's effectively only 10 bands.

I have heard from some others that it works in other applications but not using those apps I have no idea really. It may just be a filter in those apps with the same name. In FCP, the 10 band setting seems to have no effect.

QUICK TIP: While playing back an edit and having this or other filters active, you can use a mouse like the Mighty Mouse to adjust the sliders in real time during playback when normally it would stop if you click and drag on a slider. Just position the cursor over a slider and use your scroll wheel/ball...just don't click or playback will likely stop.
Posted by Walker Ferox at 12:53 AM 0 comments