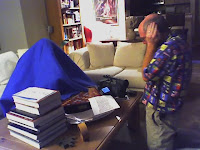 If you don't have access to a proper sound booth or simply don't have time to get to one when the client notices a week later that their copy for the VO was wrong, you can record your VO in a car away from traffic without the engine running or inside a closet (preferably with lots of clothes around to absorb sound) or if time is of the essence (like I said, when the client suddenly reads the copy they handed you and hours before airtime they notice their mistake that only they'd know) by placing your talent and microphone under a thick blanket in a quiet room.
Posted by Walker Ferox at 12:29 AM 0 comments

Be Evil, & Save Audio Sweetening Till The End

Here's a little evil tip: Save your audio sweetening for the end. Why? Well, have you ever had a client who keeps monkeying with the project making irrelevant changes and basically just toying with the edits for no real rhyme or reason?

What I do is save the audio sweetening and music levels until the very end. After seeing so many versions with poor audio, then suddenly seeing a version with music levels up, audio panned correctly (usually just centered if someone decides it's a good idea to have offset audio channel levels when audio was recorded to "save" the peaks...grrr) the client will think some miracle just happened and often they'll love the version. Evil yes, but so is making dozens of meaningless tweaks over a week.
Posted by Walker Ferox at 4:12 PM 3 comments