Sometimes the Canvas window gets a little confused. 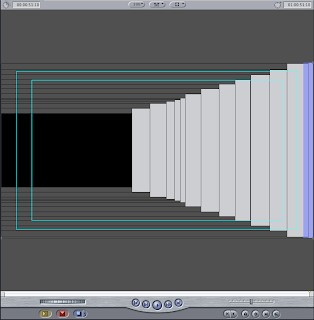 Posted by Walker Ferox at 2:59 AM 0 comments

A friend as a Firewire port that's slowly going. As it gets progressively worse it starts to do some interesting things when you mount Firewire hard drives or cameras. One thing is this when you mount an HVX-200:

As you can see the files listed on here not only are not real files you'd find on an HVX-200 mount but they make no real sense. This behavior was consistent with only the names changing.

For me, the most interesting thing was that FCP would see the footage while the P2 card was mounted like this but there would be massive artifacts during playback. Plugging the exact same camera and card using the same Firewire cable on another Mac acted normally.

Out of curiosity I reset the PRAM, SMC and all that on the Mac without any of it helping.
Posted by Walker Ferox at 2:20 AM 0 comments

I've been gathering up and organizing footage for an upcoming documentary. As you can imagine there are boxes and boxes (which spiders LOVE to hide in) of old VHS and Hi-8mm tapes. Not only are tapes surprisingly delicate after being warehoused in non-air conditioned buildings but they also love to stick to themselves after not being run through a deck for 20+years. 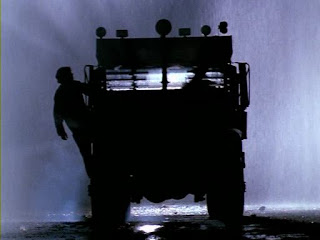 As I catalog and load tapes into FCP with Log & Capture I've noticed that some Hi-8mm tapes have glitches in them that only FCP or my analog to digital converter (Canopus) seem to be affected by. When the tape plays in the old deck or camera visually and aurally it's fine, but FCPs Log & Capture window will jump and skip and just not show entire seconds worth of footage sometimes.

When you play back the captured footage portions are literally skipped as if FCP decided to do ripple-edits on it's own, randomly.

As this footage is important, and often the only copies left on Earth, I had to find a way to load in all the footage minus these mysterious skips. What mostly does the trick is to connect the old tape deck to the converter box via an s-video cable; that virtually eliminates the drop-outs. Conventional composite video can't cut it and I'm not sure why. What's more mysterious is that the drop-outs are always in the exact same  place.

So, if you have some persistent drop-outs while loading in old tapes try using s-video, technically the quality will be slightly higher (but you likely won't notice) and it'll help eliminate most of the drop-outs. If anyone has any info about these kinds of mysterious drop-outs let me know.
Posted by Walker Ferox at 3:36 PM 0 comments