Get Info vs Movie Inspector

Ever notice that sometimes the file size shown in QuickTime's "Movie Inspector" window and the Finder's "Get Info" window are different for the same file? 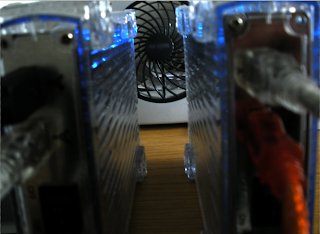 A friend of mine is working on a documentary about an unfinished, unreleased feature film that should be pretty interesting when completed. He's been loading in (digitizing) TONS of behind-the-scenes footage from 25+ year old poorly preserved VHS, Hi8 and VHC-C tapes to a pile of external hard drives. One of his hard drives decided this past week to seem to work fine capturing footage from tape but when he looked at the clips in FCP (and QuickTime) there were horrible show-stopping glitches that would actually hang FCP and QuickTime.

They seemed to occur at random intervals, about 2 hanging-glitches per 3 hours of capture.

I suggested after visiting him and putting my hand on one of the drives as he recaptured a 6+hour tape that he needed to cool it better somehow. External drives without fans usually don't last terribly long in my experience when working with video. We dug around and pulled out a small electric fan plugged it in (separate circuit from the HDs) and just pointed it at the drives, stopped the capture and started it fresh.

Later that night he called me thanking me that it seemed to have worked.
Posted by Walker Ferox at 8:02 PM 0 comments