If you're looking for a way to rip footage from discs clients insist on handing you, you may want to have a look at MakeMKV. MakeMKV basically rips DVDs, Blu-Ray into .mkv files and also streams them to many players. It's free while it's in beta.

Another converter to check out is the FREE tsMuxeR. SmartLabs tsMuxeR – the software utility to create TS and M2TS files for IP broadcasting as well as for viewing at hardware video players (i.e., Dune HD Ultra, Sony Playstation3 and others).
Posted by Walker Ferox at 4:58 PM 1 comments

If you're seeing two or more help menus in an app or two the prevailing theory is that it's caused by the DivX extension somehow. Although not everyone is seeing this errant behavior.

I'm not seeing it on any machine here and some people report that they have multiple help menus even without DivX installed. I dunno. I wasn't aware of it until I received a few emails about it.
Posted by Walker Ferox at 4:02 AM 0 comments

I found a screenshot I took while messing with one of the dead drives which is interesting and kinda funny: 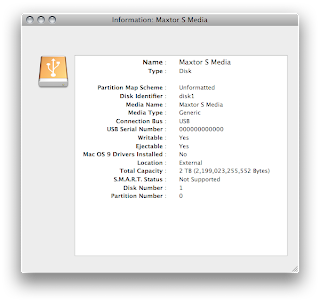 After the drive failed to mount (and stopped screeching and clunking) I tried to mount it via a PATA-to-USB adaptor and saw the above. The funny thing to me is that the drive is actually 300GBs, not 2TBs. Maybe 2,199, 023, 255, 552 bytes is all the USB adapter can handle.
Posted by Walker Ferox at 8:27 PM 0 comments

iVideo Converter is no longer available

I'm a bit late posting this (been busy) but iVideo Converter is gone...for now.

EDITOR NOTES
iVideo Converter is currently unavailable. The developer has requested that MacUpdate no longer link to iVideo Converter, as changes in PayPal fees have made the app less viable to develop so it can no longer be purchased. This situation might change in the future, but no solution is expected short-term.

The last version released was 2.1.7 and can't be downloaded from Macupdate or Versiontracker. iVideo Converter's site is down and if you purchased it their contacts page is gone as well.

As far as alternatives go there is still VisualHub - if you can find it.
Handbrake - but only outputs a few formats.
iSquint - Discontinued.
Or some of the on-again, off-again VisualHub replacements, like FilmRedux, Redux Encoder, VideoVangelist (discontinued), etc...

Then there are other converters out there with hit-or-miss reviews like Episode, Video Monkey, or others.

And there's also MEncoder if you like to type a lot. And iSkySoft's simply named "Video Converter".

For clients I find myself using Apple's Compressor and Adobe's Media Encoder a lot. Oh, and Mpeg Streamclip for the odd Flip HD video client's love for me to "incorporate" into their "vision". Gah...when they're sitting watching me work I make them watch FCP render Flip .mp4's because I'm evil like that.
Posted by Walker Ferox at 2:53 PM 4 comments

Mac OS X Hints has an interesting post about how to rip just the audio from DVDs. I've only really had to do this a couple of time, but when I get a chance I'm going to test out some new methods.

They cite this method, which uses Mac The Ripper to rip the AC3 audio and then ffmpegx to transcode it to mp3, but the apps are a bit long in the tooth (ffmpegx's last update was January 26th 2008) or a bit tricky to get a copy of a recent version.

An alternate to ffmpegx is MAC3dec but that's a bit of an old app as well. Apparently last updated on August 26th 2004.

Mpeg Streamclip is probably the best way to go that I've seen so far.