A while ago I posted about how FCP (6.x) has trouble with displaying Audio Waveforms while it's not zoomed in. Today I ran into another interesting Audio Waveform issue again with FCP 6.x (thanks to the client's machine I'm working on).

You can see that only one waveform is shown and even that's fragmented. The top two audio tracks are disabled via Control + B. When I delete them since they're not needed this is the consistent result:

Suddenly FCP decides to show the lower audio track's waveforms all the time when it was horribly inconsistent before. In fact, it was so bad before that I wasn't able to really edit the audio precisely quickly because the waveforms would come and go. I tried restarting FCP, the Mac, clearing caches (including the waveform cache) and nothing helped until I just deleted the audio tracks that aren't needed anymore (until the client wants them back or some nonsense)
Posted by Walker Ferox at 12:50 PM 0 comments

VLC for the iPad

VLC is coming to the iPad. Suddenly the iPad seems a lot more handy for dealing with clients.
Posted by Walker Ferox at 5:19 PM 0 comments

I'm not sure what Sony is thinking here but if you burn a DVD using one of their DVD Recorders and then pop it into your Mac you'll see the contents are shown as empty despite it playing in DVD Player.app. 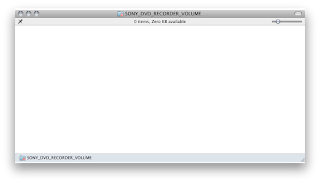 It's not empty. There really is a VIDEO_TS folder in there, only Sony doesn't want you to see it. I'm not sure what they've done to make it invisible since it'll still be invisible even if you show hidden files in the Finder (still gotta figure that one out, see below). Sure it'll show up on some Windows and Ubuntu boxes but not on Snow Leopard. Lets see if we can just change the permissions to access the VIDEO_TS folder... 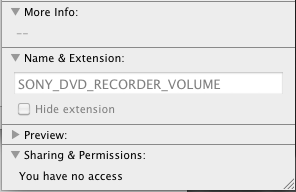 Nope.
So how can you copy it?
Well, the usual methods work like Toast & Disk Utility although I had an issue with Disk Utility not ever "finishing" the disc. It just unmounted, never said it was done and the disc kept spinning in the drive forcing me to restart the Mac to get it to eject (Hey, holding the mouse button while the Mac boots still ejects stuff after all these years...go figure).
So, angry at Sony for hiding the VIDEO_TS folder from me even though the client who handed it to me OWNS the content on the disc (and couldn't have known about Sony's degage draconian attitude) I decided to find a way to get to the VIDEO_TS folder just to spite them in Snow Leopard. Here's what I did:
1. Pop the disc in. Open it in a Finder window.
2. Launch the Terminal.
3. Type cd (spacebar) and then click and hold on the icon at the top of the Finder window for the disc and after a beat drag it into the Terminal to set the path.
4. Hit Return while in the Terminal.
5. For fun type ls (for list) and see "ls: .: Permission denied" so force it to list the contents by typing "sudo ls" without the quotes and then enter your password and hit return.
6. Bang. VIDEO_TS is listed. Screw Sony.
7. Copy this to your Desktop with "sudo cp -R VIDEO_TS ~/Desktop" sans quotes and enter your password. If you want to copy to a place other than the desktop just put a space after VIDEO_TS and drag the window icon of the volume or folder you want to copy it to to the Terminal window. An example would be "sudo cp -R VIDEO_TS Volumes/volumename/foldername"
8. Toss the VIDEO_TS folder into Disk Utility or Toast and burn it as the client requested and screw Sony.
9. Feel free to change the permissions for the VIDEO_TS folder as you need from the Finder now.
About why the VIDEO_TS folder is invisible I suspect it has something to do with this:
Macintosh:SONY_DVD_RECORDER_VOLUME user$ sudo ls -al
total 8
d--x--x---   3 4294967295  nogroup   88 Jan  2  2004 .
drwxrwxrwt@ 12 root        admin    408 Sep  8 23:03 ..
dr-xr-xr-x   2 4294967295  nogroup  768 Jan  2  2004 VIDEO_TS
Macintosh:SONY_DVD_RECORDER_VOLUME user$
"sudo ls -al" forces the Terminal to show the permissions of the files in the directory and as you can see two files are assigned to "nogroup". I suspect this is what's helping to hide the folder although I'm not done investigating just yet.

Another option is to just pop the disc into a box running Ubuntu and simply drag it to some volume to copy it. How can you not love that?
Posted by Walker Ferox at 2:13 PM 7 comments

Dimmer is a new FREE app that adds some additional levels of brightness to your display.

"Dimmer is an application that helps give that extra detail to the brightness of your display.