Sort the Bin by Date Modified

Similar to sorting the Log and Transfer window by Date Created, you can sort a Bin in Final Cut Pro by Date Modified to show some pesky footage in the order it was shot.

Not all cameras log date created but most will transfer in chronological order via numerical order. So, in this case if you right-click on a column header in List View in a Bin you'll see Logging Columns. Select that, then go back and select Date Modified to have your footage (hopefully) listed in chronological order in your Bin. 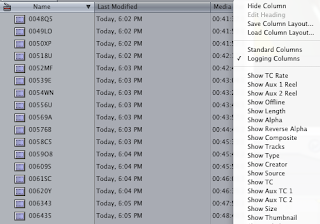 Here's a gotcha you won't find out about until later. When capturing VHS (or any other "live-feed" video) through a converter box into Final Cut Pro, a GSM cell phone's "speaker buzz" can actually be recorded to the captured video clip.

"The cause of this buzzing has to do with GSM's "time division" nature. The ever-knowledgeable Keith Nowak, spokesperson for Nokia, explains it as follows: "[[With GSM]] the RF transmitter is turned on/off at a fast rate, and that 'pulsing' is often picked up by nearby devices that don't have good RF shielding. In the case of GSM the pulse rate is 217 Hz, which can be easily heard."

Phone vendors are aware of the problem, and fortunately for us, a solution is in the works. "Because cellular phones operate at frequencies so close to audio bands, it is not uncommon for them to occasionally drop into the range where the radio waves can be translated into sound waves by a mock radio receiver," said Vicki Livingston, the director of marketing for 3G Americas "A new standard is currently available in draft form which provides guidance to the manufacturers of products that can act as unintentional radio receivers so they can build shielding in to their designs."

That bodes well for future phone designs. Unfortunately, there is virtually nothing you can do about it now. Currently, there's no way to avoid the buzz unless you switch to Verizon or Sprint.

Verizon and Sprint CDMA phones don't have this buzzing sound because their transmitter is on most of the time, according to Nowak. As a result, the pulsing effect generally doesn't occur.


What can you do about it?

The best thing other than turning off the phone or moving the phone as far away from the speakers as possible is to rotate the phone (adjust it's yaw angle) so the signal is perpendicular to the speaker's amplifiers. But Euler or Tait-Bryan? :)

It's a bit of an old article so I don't know how accurate it is today but be aware that if the speakers on the capturing computer make the noise it can end up being recorded to the captured Quicktime file.

Unless of course you use tube amps and/or have your editing equipment inside a Faraday Cage.
Posted by Walker Ferox at 7:14 PM 0 comments

Apple updated it's troubleshooting page for Soundtrack Pro 3 and I thought it was kinda funny: