Sometimes you'll run across this handy error message while trying to copy something to a drive. I have no idea what it means. But I do know that the Finder thinks the drive is still in use by something when in reality it's not.

You have two options in my experience.

A. Force Eject the drive.
B. Restart.
Posted by Walker Ferox at 5:25 PM 0 comments

Would it be so difficult for the Finder to let us know which drive's cord was tripped over at a live event? 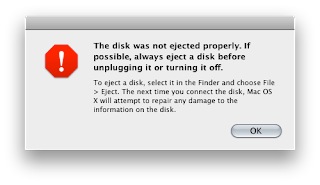 It couldn't be that hard to just name the volume that vanished right?
Posted by Walker Ferox at 4:49 PM 0 comments

Super-VHS has a pretty interesting history. Playing catch up to Betamax too late with too little while SuperBeta and ED-Beta tried, the extended recording times of VHS quietly conquered* all.

A friend recently called me to ask me about how to transfer some S-VHS to a hard drive for editing. He mentioned in passing that it wasn't a "real" S-VHS tape but didn't know what that meant. Now, quite unfortunately, I've dealt with S-VHS before at a local TV station who uses nothing but (and still does...) and learned a thing or two about S-VHS that you won't find in the manual but you will find mentioned online after whistling for The Great Gazzogle: 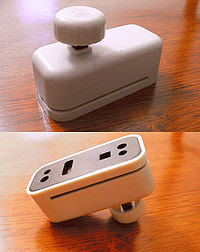 Videophiles were the first to theorize that since the only distinguishing feature of an S-VHS tape is a small 3mm hole in the cassette, it should be possible to use more common and inexpensive VHS tapes by duplicating that hole. In attempts to record S-VHS content to a VHS tape, picture quality is somewhat better however after several months the quality drops dramatically to a point of severe graininess or pixilation in dark areas in the images, due to the standard tape's lack of required coercivity. Eventually the recording becomes unwatchable however but can be re-recorded without problems in VHS format as the oxide media is still undamaged, although re-recording in S-VHS format will eventually encounter the same problems as before.
Is that true? Yep. In my experience is, although to varying degrees of "lost".
Take a VHS tape, drill a small hole in the case in the lower left in the groove, record your precious memories and then promptly loose them in a year or three. It's the dark secret lurking in many new stations, libraries, high school and university's archives just awaiting discovery and a few tears.
So a tape is essentially lost to technology. While backups are a good idea, backups to different formats is an even better idea.
Thankfully, 5 1/4 floppies didn't have a coercivity problem to you can still play that copy of Amazon Warrior you kept on the b-side of Project Firestart.
* with wee bit of help from the porn industry.
Posted by Walker Ferox at 4:17 PM 0 comments