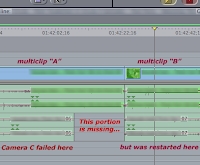 Say you have a three camera shoot, and one camera goes out during the shooting but is quickly restarted or restored during the take. You can't add that "fourth" clip to the original three via Insert New Angle or Insert New Angle Affiliates because the sync isn't there.

The trick is to truncate the original multiclip in the Timeline at the point where the camera was lost and then create a new, second multiclip (call it part 2) with the "fourth" clip and then place it into the Timeline after the truncated first so it's a seamless edit when the camera was brought back up.
Posted by Walker Ferox at 5:08 PM