It has to do with FCP 6/7's insistence that it pretend it's a studio monitor. You'll see the same kind of shift when you go into System Settings… (Shift + Q) and click on the "Playback Control" and toggle Gamma Correction from "Approximate" to "Accurate". 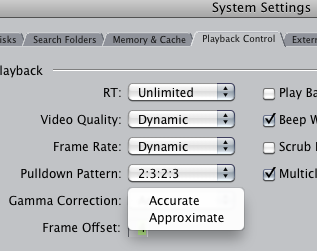 If you set Gamma Correction to Accurate, FCP will shift the gamma of the canvas to emulate a broadcast monitor and you'll see no change in gamma when toggling Toggle Range Check because it's already in "emulation" mode, as I like to call it.

Btw, strange as it may sound, if you're not using a TV or studio monitor setting this option to Approximate is more accurate. You may see your footage look a bit less contrasty but that's likely more accurate in most cases. FCP won't apply a bit of gamma juju and jump from 1.8 to 2.2 because it won't assume everything is 1.8.

I like to keep this setting to Approximate because in my case, with my setup, it's more accurate to what's been actually loaded into FCP and more closely matches the raw footage. Exporting to Quicktime is another matter entirely.

None of this holds a candle to a real broadcast monitor or decent TV though for gamma/color grading/correction.
Posted by Walker Ferox at 12:40 AM

And apart from anything else, approximate gives better performance.