Place your cursor over either the Viewer or the Canvas then hold down the H key.

You should see the Viewer or Canvas pop out at 50% size no matter what it was originally set to. Why? I dunno, it's probably some function or preference or something I've missed all these years. But it's pretty cool nonetheless and could be handy since 50% gives a clearer representation of your footage than odd numbered percentages, although 50% won't reveal interlacing as 100% does. Man I'm up late.
Posted by Walker Ferox at 4:20 AM 1 comments

I get audio CD's from clients all the time which they've burned music or VO's or sound effects on to. The thing is unless you've told iTunes to:

A: Not launch when an audio CD in inserted.
B: Not to query Gracenote for CD/Track names

You'll end up with some pretty weird stuff as the name of the Disc and Track names. I find this pretty annoying which is why I've turned off all that stuff on iTunes here at the editing command center. But, when you are away from the Mothership and have to deal with this stuff you should be aware of what's happening.

Today, I was at a client's place and they decided rather than give me the audio cd they had in hand, one they burned off and quite likely the only copy, they decided they wanted to give me the tracks on a flash drive. Great! I love LOVE flash drives instead of optical discs. However...

When they handed it to me and I checked it right there and then on their computer the tracks were there, they played but there were named completely totally and bizarrely incorrectly. What had happened was that they had popped in the burned Audio CD, iTunes fired up, query'd Gracenote and decided it was someone's mix-tape CD (mix-CD?) from what was likely China. Whomever had made the CD originally, in fact, whomever had made the audio tracks, never named them I'm guessing.

Not a big issue if there's just a track or two but this audio CD had 40+ tracks of sound effects. The Finder had copied over the tracks as named by iTunes. I explained to them what happened, no, it's not a virus, no you haven't been hacked and no, they're not watching you on your webcam nor have they stolen your Facebook/Linkedin/Twitter/Whateverthehellsocialnetworkingcrapyouuse password (I should be as lucky). And you're right, I haven't "friended" you.

I told her I can't rename the tracks accurately. There are 40 of them and I don't know one from the other...yet.

So to fix this issue in the future I did a few things:

1. I hit Command + Comma in iTunes to bring up the Prefs.
2. Under General I unticked "Automatically retrieve CD track names from internet".
3. I went to username/Library/Preferences and deleted (emptied trash, my word was it full...had she ever emptied it?) "CD Info.cdib" which is where iTunes stores it's metadata on CD's it's looked up.

As an aside you can edit this file with something like BBEdit if you feel like it to remove the offending CD. You'll see a pattern to how they're listed but I wasn't in the mood and it was so large and Command + F (find) wasn't finding the misnamed names I didn't bother.

4. Eject the Audio CD.
5. Re-insert the Audio CD and saw that it was shown as "Audio CD" with "Track 01" etc...
6. Told her to (and showed her how) name the tracks what they needed to be named and to call me later. Yes, I'll leave the flash drive.

But what about the original audio files you ask? Surely they were named correctly? I imagine they would be if she could find them. I suspect they were in the trash I emptied. Go me!
Posted by Walker Ferox at 6:34 PM 0 comments 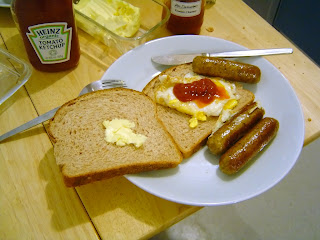 Once again a client asked me for "an avi" of a video. Avi was introduced in 1992 or so by Microsoft and has really been a positive and exciting boon to the pirated movie industry ever since. Aside from that it continues to cause headaches for "video people" and fellow "creatives" like myself.

.mov, .mkv, .avi and others are containers which mean they're like sandwiches, I tell clients. (Did you see that? I began a sentence with a period, hah! Mrs. Roberts was wrong!) Not all sandwiches are good, and asking me for "a quicktime" or "an mov" or "an avi" is like asking me for "a sandwich on white bread". You've specified that you want a sandwich (video file), with white bread (container format) but you have yet to tell me what kind of sandwich you want (codec).

This seems to be the only way to get through to some clients. "You're ordering a sandwich with white bread but I don't know what kind of sandwich you want. PB&J? Mustard and Lettuce? Cheese and Anchovies?" "What do you recommend?" is usually their response. I dunno. What kind of sandwich does the thingy that you're going to play it on ask for? In the manual. Yes, that one, the one you didn't read.

Today I literally said to a particularly ornery client, "I need to know what you want between the bread, otherwise we're going to have to try a bunch and see which works and looks good." See, I'm making a video in an outdated format, using outdated software for a client's outdated hardware. This is the kinda fun that only a college education can provide, kids.

Things like H.264 solve this problem. They're PB&J sandwiches all the time. And something known as a "standard".

The second most oft repeated phrase from me on the phone is "No, I wouldn't recommend a .wmv."
Posted by Walker Ferox at 1:07 PM 4 comments