ProRes Plays Back Brighter in Viewer and Darker When Paused

Have you noticed this?

Load a ProRes clip into the Viewer in Final Cut Pro and it looks a little dark. Hit play and it brightens (gamma) until you pause, then it goes a little dark again.

I'm not sure why this happens but I see it regularly with ProRes clips. Some say it's the data rate being lowered for slower drives, others say it's the type of compression the timeline is using (highlight the sequence in the Browser, hit Command + 0 (zero) then look at QuickTime Video Settings in the lower left).

There's a brief discussion of it here on the Apple boards.

For me the difference in a clip that does it seems to be the size.

A ProRes clip which is 854 x 480 does have the brightness playback issue.

A ProRes clip which is 720 x 408 does not have the brightness playback issue. (Inconsistent though; some clips have the issue while others do not)

A ProRes clip which is 720 x 480 does not have the brightness playback issue.

That's the only difference I can determine between the two clips.

Playing the clips in QuickTime Player does not show a gamma shift.


I don't know a solution to this and really, it's just an annoyance overall; but it's good to be aware of it.

The Soap Opera Look (and how to avoid it)

I had a client call the other day complaining that the HD final edit they were sent looked like "it was shot on video" when they showed it in their lobby. After many phone calls and questions I found out that the problem was their giant plasma tv itself.

It turns out that it had a non-user controlled "look" to it to interpolate frames between frames which makes the footage look (in effect) like it has more frames than it does, hence the video look…like a soap opera.

There's an interesting little discussion here about it which is well worth a read. The salient point is this:

"Most film is recorded at 24 frames per second, but your LCD TV probably either displays at 60 fps or 120 hz (hertz is just a measurement of frequency per second). There are three main ways to cope with this.

First is to simply display each frame longer, this is the oldest technique in LCD tech. However, its undesirable side effects include the possibility of motion blur, or of judder. Judder is an artifact of adjusting the framerate and it looks like a sort of stutter in movement that would otherwise be smooth (a slow pan, for instance).
The second technique is one used on Plasmas and CRT TVs. Instead of showing a bright image the whole time, they display the frame, then a short frame of either darkness or a very dimmed picture. This alleviates much of the issue with judder and motion blur as it allows your brain to fill in the gap faster than you can consciously notice. It is also an old technique, and is used in theaters. It provides the traditional cinema feel.
The most recent and advanced technique is motion interpolation. Motion interpolation is a process by which your TV analyzes the current frame, and the next frame, then creates an average. It inserts these averaged frames in between. The result is extremely smooth motion with no motion blur and judder becomes almost non-existent. There are a few technical issues with this, including the possibility of ghosting or artifacts in rare cases. Also the smooth movement this creates is slightly disconcerting."
Which is taken from this page (also worth reading).
Posted by Walker Ferox at 11:29 PM 0 comments

Apple has decided with Final Cut Pro X that you should see all projects all the time in the interface. Some people don't like that. Say for example you edit training videos for two rival companies. It's okay for you so see the proprietary stuff but it's not really the best idea to let one company know you're working for their rival as well.

So, Apple has revealed how to "hide" (remove) a project (event) in Final Cut Pro X. They posted a document about just this one issue here.

Basically you move a project's media (event) from the folder Final Cut Pro X looks in to find events to another folder so Final Cut Pro X just doesn't see it. It's like hiding your car keys in the sun visor.

How hard would it be to add a Visibility Toggle or something within Final Cut Pro X? I mean really.
Posted by Walker Ferox at 8:29 PM 0 comments

The good news is that Apple itself says FCP 7 will work with Lion.

In my opinion the Media Management section is the most interesting (and going to be the biggest hassle).
Posted by Walker Ferox at 9:03 AM 0 comments

Ron Brinkman (former product designer for Shake) has some things to say about Final Cut Pro X and Apple in not caring about the professional market here.
Posted by Walker Ferox at 9:01 AM 0 comments

There are myriad audio recording apps for the Mac now. Some are (kinda) built in like Quicktime Pro's "New Audio Recording" and some are expensive like Final Cut Studio's ability to record directly into Soundtrack Pro and Final Cut Pro.

A new FREE audio recorder is AudioCapture [app store link] It records to these formats: 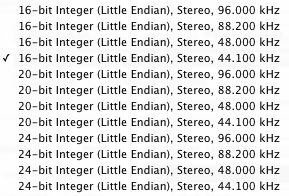 But it does so as a .mov which while not a deal breaker is a bit of a hassle. Still, it's free.
Posted by Walker Ferox at 10:08 PM 0 comments

MacMagazine has discovered [google translation link] that the ability to import a Final Cut Pro XML file is kinda sorta already in Final Cut X but isn't working. Either it's going to be implemented in an update or will work in tandem with a stand-alone app that converts Final Cut Pro XML into something Final Cut X can import.

The Next Web is reporting that Apple is apparently issuing refunds to some people who have purchases Final Cut Pro X and have been less than satisfied with it.
So there's hope if you've been trying to log tapes, or cut multicam projects or open FCP6 or FCP7 projects in FCPX.
Posted by Walker Ferox at 6:56 PM 1 comments

Wondering if Final Cut Sutio 2 or 3 works with the upcoming Lion OS?

RoaringApps tries to keep track of what works and what doesn't with Lion, you can check out the F lettered apps here. Currently FCS 2 is untested and FCS 3 has some issues but they seem to be Quicktime ones, not specifically FCS 3 issues.

Worth checking once in a while to see how things are going.

UPDATE: Apple says FCP7 will work with Lion here. No word on FCP 6 from them however.
Posted by Walker Ferox at 11:30 PM 1 comments

I mentioned this FREE app [app store link] to a friend the other day and was surprised they hadn't heard of it considering they work as an editor for a tv network.

Anyways, Blackmagic Disk Speed Test stress tests a selected hard drive to determine what kind of read & write speeds it can handle and subsequently what kind of video playback performance you can reasonably expect. Check out the included manual for a quick explanation of what everything means.
Posted by Walker Ferox at 12:58 AM 0 comments

Dvice has an article on Final Cut Pro X

Dvice has an article titled "Final Cut Pro X: Apple's biggest mistake in years?" which you can read here.
Posted by Walker Ferox at 1:28 PM 0 comments

There's a lengthy thread here with all manners of comments after Randy Ubillos apparently returned an emailed question about FCPX.
Posted by Walker Ferox at 1:15 PM 0 comments

Josh Mellicker has a quick write up of his thoughts and history of FCPX here.
Posted by Walker Ferox at 1:14 PM 0 comments