Where was that Render Folder?

A friend called today and asked me something I've never thought about before regarding FCP.

"How do I find out where the last Render Folder was for this project?"

"Because I have 4 hard drives hooked up and I changed the scratch disk for another project and FCP is asking which one I want to use now because that one's gone."

"Did you search for the project's name on your Mac? It'll be named that. Sort by Kind and look for folders. One will be inside a folder named Render Folder."

"I guess you could look inside the FCP save file and search for the words "Render Folder"."

"Drag the save file to TextEdit, it's basically a text file, then hit Command F and type in "Render Folder" and then hit Command G to skip through all the results. Look for what hard drive it's on." If you try to burn an optical media disc and for some reason it fails (the Finder is notorious for this...stupid .DS_Store files...) and you then try to eject it and can't no matter how many times you hit the Eject key or try ejecting in Toast, try launching Disk Utility and highlighting the optical disc and hitting eject in the toolbar. Usually, the disc will pop right out.

(Btw, recently I had a DVD+r DL disc that failed to burn in the Finder but trying the next disc in the spindle worked fine with Toast. Grrr.)
Posted by Walker Ferox at 4:56 PM 0 comments 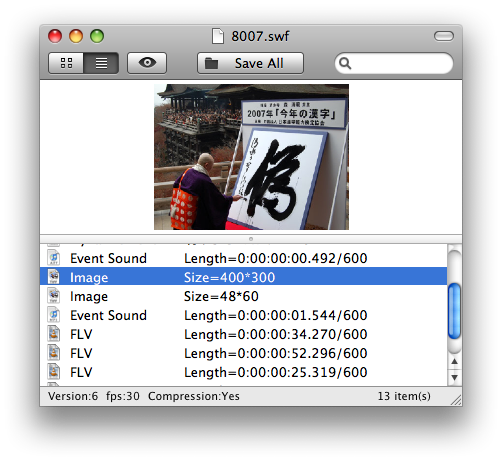 As an editor you'll be provided with the media the client wants to incorporate into the project. However, sometimes the client is utterly clueless and will send you things that are sometimes less than useful. A friend of mine called me in a panic because the client emailed him some media to use in the current project in the handy dandy form of a .swf file.

I'm sure the client asked the media department of their megacongolmerate for the "files" or the "images" or "whatever we have on the website" to synergize into their vertical brand marketing deliverables objective action points or some garbage.

Looking around I found this neat free app called Flaex which extracts stuff from .swf files. It even has previews of images and sounds right within the app, beware though that if you click on a long sound file there's no way to stop it from playing, you just have to wait it out.
Posted by Walker Ferox at 9:41 AM 0 comments

Disk is in Use and You Can't Eject It

Ever had a hard drive you can't eject because the Finder claims it's in use even though no project is open on it, no file is open, no anything is anything on the drive?

Usually the culprit is FCP which sometimes doesn't want to be left all alone and desperately clings to any last vestiges of its former usefulness. There's a Terminal command to find out what is using the drive (or at least what file is open on it) but it's the Terminal and that's not very Mac-Like.

So, recently a free application called WhatsOpen appeared and it's perfect for finding out what's going on. Give it a try and donate something if you like it and find it useful.

This is different from when the Finder just decides to leave a properly ejected drive's icon in the sidebar which does happen on occasion. Those you can just drag out of the sidebar and enjoy the poof of smoke.

If you really want to know the Terminal command it's:

Where Volumes/Stubborn-Hard-Drive is the path to the hard drive in question. To make it a little easier just type:

into the Terminal, then drag in the stubborn hard drive from the Finder and hit return. You'll see what file is "in use" on the drive. lsof, btw means LiSt Open Files.
Posted by Walker Ferox at 10:17 PM 0 comments

I haven't had time to really test this and see if it's an occasional bug or an actual repeatable bug but, I had a Typewriter Text Element which needed to be extended a few seconds after it completed it's action. So, opening it up in the Viewer and hitting Shift+N (for still frame) I noticed that it removed the last one or two frames of it's typing action.

So, instead of it reading Day014 it would suddenly read Day01 when I hit the key combo. I'll investigate it further but it was repeatable that day and I didn't try restarting FCP to see if that cleared it up. The project isn't over yet so I'll have more time to test it later.
Posted by Walker Ferox at 10:08 PM 1 comments

Before the Ripple Delete

After the Ripple Delete

A restart of FCP fixed it which goes to show that something as complex as FCP can get confused sometimes.

Always make sure you set your auto-saves to a different drive than your project drive (preferably one with Time Machine going) and don't be reluctant to save and restart FCP when things get strange.

(the stills were pulled from a video my assistant took with his little portable camera, it's interesting to see the convex curves in the stills even though the editing monitor is a flat LCD, due to the lens on his camera)
Posted by Walker Ferox at 10:00 PM 0 comments