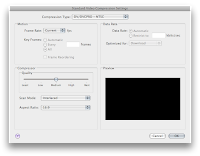 When you bring 16x9 DV footage into FCP it loads it as 720x480 pretty much no matter what. So when you export your timeline with a quick Export To Quicktime Movie you end up with your 16x9 footage squeezed into a 4x3 space. Why? Blame all this non-standardness mess. So, how do you fix it?

First off don't Export To Quicktime Movie, instead use Export Using Quicktime Conversion.

01) Make sure the thing you want to export is active (ie..timeline, sequence, viewer...)
02) In the menubar goto File>Export>Export Using Quicktime Conversion.
03) In the Save window that pops up hit Options.
04) In the next window, called Movie Settings, hit Settings under Video.
05) In the next window, called Standard Video Compression Settings (I think), under Compression Type select DV/DVCPRO - NTSC.
06) Then, in that same window at the bottom left set Aspect Ratio to 16:9. The rest of the settings are up to you but I like to choose Progressive and Best quality under the Compressor setting.
07) Hit Ok, hit Ok then hit save (after you make sure it's going to save it where you want it.

Done. Your footage will play back at 853x480 in a nice widescreen QT window. Yays!
Posted by Walker Ferox at 11:26 PM