ProRes is really great but it has some limitations you should know that can trip you up later.

A friend called me tonight saying they were getting an error in Final Cut they'd never seen before which was this:

"Codec not found. You may be using a compression type without the corresponding hardware card."
I knew this wasn't true after talking to them a bit so I asked from step one what they did and discovered a big gotcha when ripping DVD content to ProRes for use in Final Cut Pro.
They'd used MPEG Streamclip to rip video from a client's DVD of old footage. Since my friend wanted to use the footage in Final Cut they set MPEG Streamclip to export (transcode) the .VOB file to ProRes.
(No, I'm not sure why MPEG Streamclip lists ProRes twice in it's export options. They're likely HQ and non-HQ but I'm certain.)
When it was done the file was great, imported into Final Cut and they happily edited away. Until they needed to render something and saw the above error. Any kind of rendering produced that error which we knew wasn't true because they had used ProRes many, many times before. Something else was different.
Dissecting the project I started to jot down all the settings and media types in the project and ran across something not readily apparent unless you know to check.
The resultant ProRes file from MPEG Streamclip wasn't a compliant size for ProRes. It wasn't either:
1920x1080
or
1280x720
If it's neither one of those sizes Final Cut pro runs and cries in a corner. My friend had left MPEG Streamclip to create a file that was 854x480 because next to it, in MPEG Streamclip's options, it reads "(16:9)" which this footage was and their thinking was that since it's a DVD they didn't need to rip it as an HD file.
I suggested they re-rip the bit of video they needed with MPEG Streamclip set to "1280x720 (HDTV 720p)". They did and after substituting the file for the renderless one Final Cut behaved as expected and rendered away. 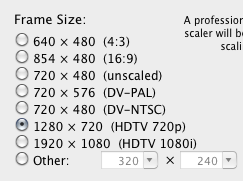 So if you rip something to ProRes make sure it's a size that ProRes and Final Cut are expecting.

For more info check out this page in the FCP 7 manual.
Posted by Walker Ferox at 11:59 PM

Great tip. It's gotchas like this that can really ruin your day. Thanks!

What I would recommend to your friend is to use the "Unscaled" frame size, and simply mark it as anamorphic in FCP. You'll probably get a slightly faster rip and use less hard drive space.